7 Jun, 2021
The Independent Complaints Commission bill public meetings will be held in Harare and Victoria Falls on June 7, Chinhoyi and Bulawayo on June 8, Bindura and Gwanda on June 9, Marondera and Masvingo, June 10 and finally, Gweru and Mutare on 12 June.

By Malvern Mkudu
After years of reluctance to implement section 210 of the constitution by setting up an Independent Complaints Mechanism that looks into the excesses of the security forces, the government seems to be yielding and has called for public hearings to discuss a draft Bill.

The public meetings will be held in Harare and Victoria Falls on June 7, Chinhoyi and Bulawayo June 8, Bindura and Gwanda June 9, Marondera and Masvingo, June 10 and finally, Gweru and Mutare on 12 June.

This is a step in the right direction given the context of a checkered history of human rights violations by security forces that date to the Gukurahundi atrocities in post-independence Zimbabwe.

In its last report, the Zimbabwe Peace Project named the Zimbabwe Republic Police as the biggest human rights violator in the country.

During the Covid-19 lockdown, the army was also named as a human rights violator.

In such cases, an independent complaints mechanism is important as it would spring into action to investigate any such accusations.

The absence of such a mechanism in Zimbabwe has allowed impunity to flourish.

The violence in the 2002 and 2008 elections perpetrated by security forces resulted in many deaths and disappearances but victims have not yet received any justice and the perpetrators have not been held accountable in some of the cases.

In 2018, security forces allegedly shot civilians in Harare resulting in the setting up of the Mothlante Commission, which made recommendations such as re-training of security forces, prosecution of those involved as well as implementing Section 210 of the constitution, which says there must be an independent complaints mechanism.

The security forces were at it again when civilians were allegedly shot during protests over rising fuel prices in 2019.

Despite independent findings by human rights watchdogs that excessive force was used by security forces, no action was taken against the security officers involved.

The violence by security forces has not spared journalists in Zimbabwe, with several media workers and freedom of expression activists finding themselves on the wrong end of the security forces’ stick on several occasions, particularly during the onset of the Covid-19 pandemic.

In total MISA Zimbabwe reported violations against 52 media workers, including journalists, vendors and media students in 2020. This is more than twice the number reported in 2019. 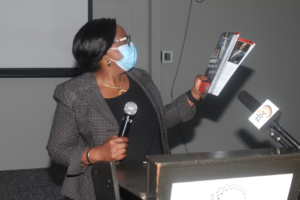 While the cases have decreased recently, illegal detention of journalists and harassment of media workers by security forces continues.

Despite these arrests of journalists over the years, none of the arrests have yielded convictions raising speculation that these are just cases of security forces’ impunity.

High profile arrests of people such as Hopewell Chin’ono have dominated the news.

Chin’ono’s camera was taken by law enforcement agents and to date it has not yet been returned.

Another journalist, James Jemwa lost a camera in 2017 after an arrest and it was never recovered.

ANZ, publishers of the Daily News, lost property to a bombing by unknown assailants believed to be security agents and no one was ever held accountable.

Mduduzi Mathuthu, another journalist, had a relative abducted allegedly by security forces and he has been living in fear ever since.

Samantha Chireya, popularly known as Gonyeti, of Bustop TV, was also allegedly abducted by security forces and was tortured.

These incidents were never sufficiently investigated to bring closure to the issues.

Journalists Munashe Chokodza and Leopold Munhende were allegedly assaulted by officers of the Zimbabwe National Army, while in another case of brutality by security forces, teargas was thrown into the 263 Chat newsroom in 2019.

These acts against members of the fourth estate have gone uninvestigated.

The police have been made accountable through a series of court defeats, with activists such as Jestina Mukoko receiving compensation for the violations perpetrated by the police and other security agents.

Ordinary people, however, do not have the resources to take security forces to court.

Until the courts intervened during the Covid-19 lockdown in 2020, journalists were literally under siege from security forces.

The police and organisations such as MISA Zimbabwe have since found each other through fruitful engagement and managed to bring the numbers down, but a mechanism such as the Independent Complaints Mechanism may assist in reducing the number to zero.

With the background of these violations, it is, therefore, important for citizens to participate in the public hearings and to have their voices heard.

In 2017 former ministers Jonathan Moyo and Saviour Kasukuwere narrated horrific ordeals of attacks on their homes by security forces.

Their homes were shot at while their families were inside.

Each of us is a potential victim of security force excess and there is a need for all citizens to close ranks and come up with a law that will make the security forces accountable for any of their unlawful conduct.

Malvern Mkudu is the Advocacy Officer of the Media Institute of Southern Africa Zimbabwe Chapter.  He can be contacted on email at mmmkudu@gmail.com