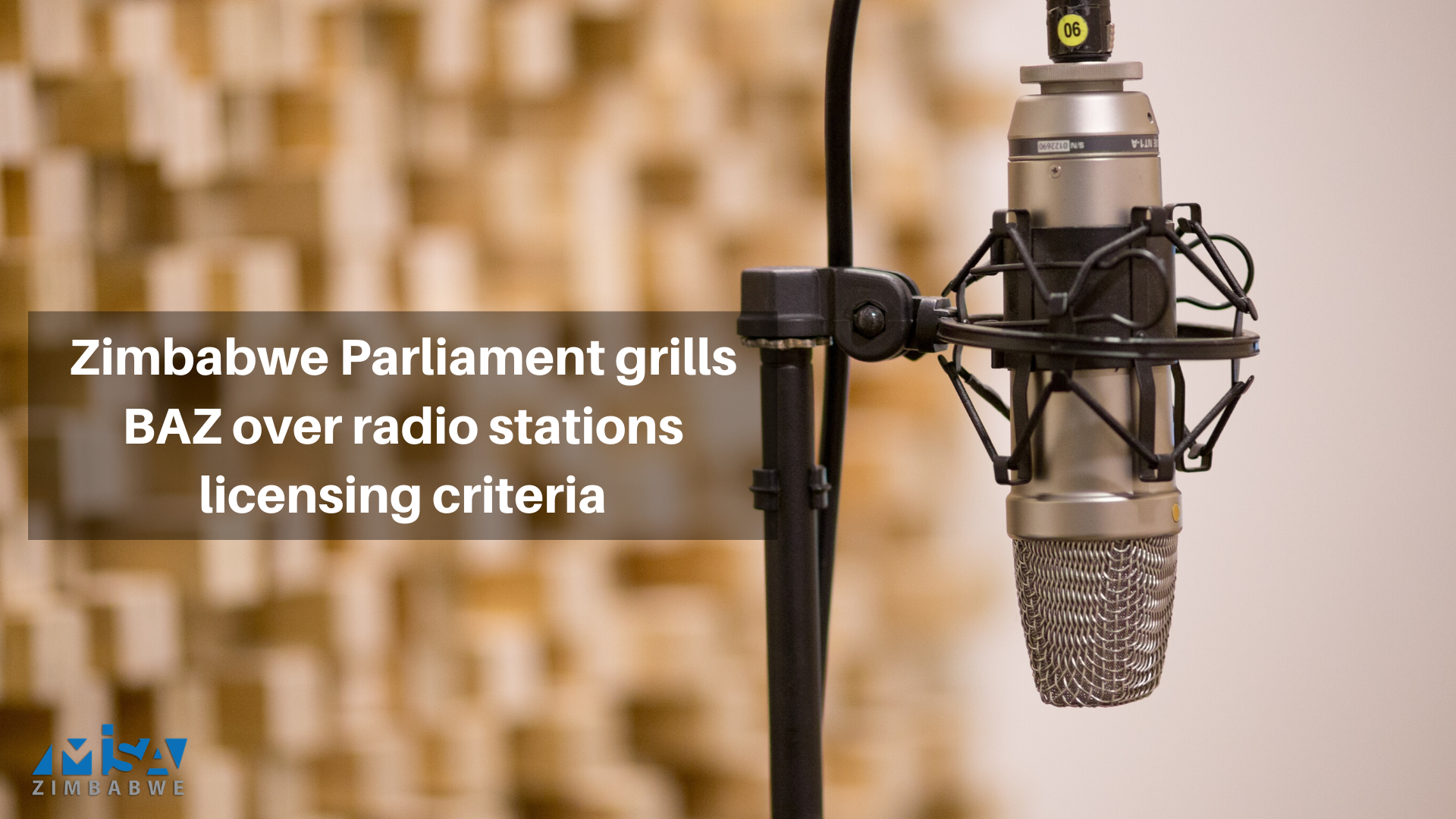 5 Mar, 2020
MISA Zimbabwe maintains that the process used to identify the 10 areas earmarked for the community radio stations was not transparent and had disadvantages to other prospective players.

The Broadcasting Authority of Zimbabwe (BAZ) board on 5 March 2020 was grilled by the Parliamentary Portfolio Committee on Information, Media and Broadcasting Services following government’s intention to license Zimbabwe’s first-ever community radio stations.

The Committee led by Prince Dubeko Sibanda was seeking clarity on the criteria used to identify the geographical areas that will see the licensing of 10 respective community radio stations as well as the attendant high licensing fees.

In response, the regulatory body which was represented by, among others, its chairperson Charles Manzi Sibanda, as well as BAZ chief executive officer Obert Muganyura, said the priority was given to ‘unserviced and underserviced’ areas with particular consideration on marginalised languages.

BAZ said they had also considered the costs of setting up the community radios adding that in some of these areas the necessary infrastructure was already in place.

However, the Committee expressed its reservations on the geographical criteria noting that ‘underserviced or unserviced’ areas such as Makonde in Mashonaland West, Muzarabani and Mukumbura in Mashonaland Central provinces were not among the selected geographical areas earmarked for the community radio stations.

The 10 geographical areas in question are;

On licensing fees, the BAZ said it had been weaned off the fiscus meaning that the Authority must be self-sufficient.

The community broadcasting licensing fee is pegged at $17,000 per annum for the 10-year licence period, which amounts to $170,000 for the licence period in addition to the $8,500 application fees.

BAZ was asked about the available frequency and how many communities radio stations it can accommodate. The regulatory authority revealed that there is room for 52 such radio stations.

Members of the Committee were also keen on knowing why BAZ was therefore only licensing 10 community radio stations of which the response was that this was due to funding constraints.

Meanwhile, questions were also raised on what constitutes a community as defined in the relevant statutory instruments gazetted in January this year. Members of the Committee were of the view that restricting the definition of community to geographical location, would, for example, exclude other common interest communities such as religious and farming groups.

The other contentious issue was on the requirement for applicants to reveal their political affiliations as this might not pass the constitutionality test.

The BAZ board members conceded that some of the clauses in the regulations were problematic, but pleaded with the parliamentarians to allow the process to continue to avoid further delays in the process of delivering broadcasting diversity to Zimbabweans.

MISA Zimbabwe maintains that the process used to identify the 10 areas earmarked for the community radio stations was not transparent and had disadvantages to other prospective players.

Considering that there is room for 52 community radio stations, there is no justification as to why BAZ has limited itself to licensing only 10 stations.

It is within this context that MISA implores the government to relook the clauses and provisions that undermine the objective of truly establishing a diverse and pluralistic broadcasting environment.

MISA Zimbabwe disagrees with the approach of using license fees as the source of funding for the day-to-day operations of the regulatory board.

For instance, countries such as South Africa, have lower licensing fees and MISA Zimbabwe urges the government to consider other sources of funding to subsidise broadcasting such as through levies collected from telecommunication companies.

In Zambia, the Broadcasting Services Fund is used to develop community radio stations.

Community radio stations are critical in entrenching enshrined rights to access to information and freedom of expression. It is therefore unreasonable for the regulatory authority to curtail these rights through a strict and prohibitive licensing regime.

The provision that requires individuals to provide information on their political affiliation is potentially discriminatory if such information is used to determine whether one will acquire a license or not.

MISA Zimbabwe implores the government to ensure that broadcasting licenses are awarded with the objective to ensure universal access, increased access and diversified programming and ensuring that the rights to access to information and freedom of expression are upheld and promoted.