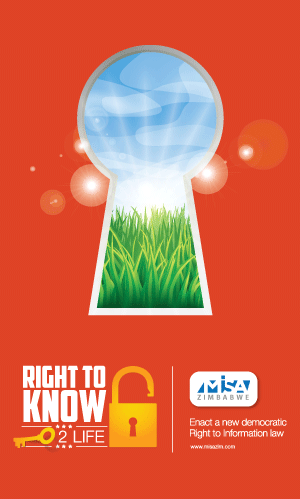 28 Sep, 2017
MISA Zimbabwe joins the world in commemorating Right To Know Day and urges the Zimbabwean government to fulfil its constitutional and regional obligations to foster the enjoyment of citizens’ right to access to information.

MISA Zimbabwe joins the world in commemorating Right To Know Day and urges the Zimbabwean government to fulfil its constitutional and regional obligations to foster the enjoyment of citizens’ right to access to information.

This year’s theme is ‘Right to Information: Open and accountable government and the media’s role’, where:

This day, which global citizens commemorate annually on 28 September, is set aside to raise awareness on the right to access information held by government and other entities to promote transparent and accountable governance.

It is in that regard and based on international and regional best practices that Zimbabwe’s 2013 Constitution demands for the enactment of a new democratic information law to replace the existing Access to Information and Protection of Privacy Act (AIPPA).

Section 62 of the Constitution, which provides for access to information, clearly states that legislation must be enacted to give effect to the right to information. Yet four years on, post the promulgation of the new constitution the government still has not enacted a Freedom of Information Law as provided for by the constitution.

In 2014, the government sanctioned Information and Media Panel of Inquiry (IMPI) in its findings also emphasised that “AIPPA should be repealed and replaced with a law that specifically provides for access to information with ample provisions for protecting this right …”

Fundamentally, the Constitution emphasises that all public institutions must be governed by principles, which include timely provision of accurate information to the public. This has barely been the case given the cumbersome nature of procedures laid out under AIPPA, where it pertains to accessing information.

MISA Zimbabwe is therefore gravely concerned with government’s snail pace in the implementation of media, access to information, freedom of expression policy and legislative reforms that have been on the agenda for ages.

The government should therefore enact the relevant Freedom of Information law and policies that enable citizens to access information, so as to foster public accountability, socio-economic development and growth.

MISA Zimbabwe therefore calls on the government speedily conform to the dictates of the constitution by ensuring that the right to information is amply protected and enjoyed without undue hindrance if public accountability on the part of government is to become a meaningful reality.

Journalist Jeffrey Moyo was on 15 June 2021 granted bail on appeal by High Court judge Justice Takuva in Zimbabwe’s second city of Bulawayo. This followed the denial of bail on 31 May 2021 by Magistrate Rachel Mukanga.  Read: Journalist Moyo denied bail Moyo was...