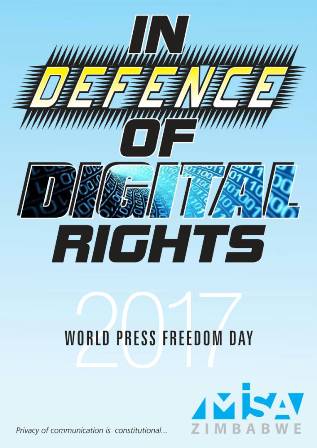 2 May, 2017
MISA Zimbabwe urges the government to ensure the proposed cyber crime laws do not erode constitutional rights to free expression online and offline.

As the world commemorates World Press Freedom Day on 3 May this year, MISA Zimbabwe urges the government to ensure the proposed cyber crime laws do not erode constitutional rights to free expression online and offline.

Sections 61 and 62 of Zimbabwe’s constitution guarantee the right to freedom of expression and freedom of the media and access to information.  These rights include the exercise and enjoyment of free expression online through the Internet (digital rights), print and broadcasting media.

MISA Zimbabwe’s theme for this year’s commemorations: In Defence of Digital Rightsthus comes on the back of the proposed Computer Crime and Cybercrime Bill.

It is our well considered view that some of the Bill’s clauses, if not amended, infringe on fundamental rights to free expression and access to information.The other bills includethe Data Protection Bill and Electronic Transaction and Electronic Commerce Bill.

While it is the government’s mandate to protect the country from crimes generated through the Internet, the proposed laws should be fair, reasonable and justifiable in a democratic society.

Section 206 of the Constitution which deals with national security implores the State to ensure that the country’s security obligations comply with the supreme law.

In particular, the protection of national security must be pursued with the utmost respect for fundamental rights and freedoms and the democratic values and principles enshrined in the Constitution and the rule of law – Section 206 (3).

The proposed cybercrime law focuses more on criminalising offences against computers and network crimes. It scantily focuses on protection of individual liberties or accountability in the process of dealing with the envisaged crimes.

The envisaged offences should be clearly defined. This is critical where it pertains to what constitutes a computer system and pornography, for example, given the severity of some of the punishments of up to 20 years imprisonment without a fine.

The bill also gives the police wide discretionary search and seizure powers to gain data not provided for in terms of the warrant issued by a magistrate.

MISA Zimbabwe thus commends the Minister of Information Communication Technologies and Courier Services,SupaMandiwanzira, following his assurances to address concerns being raised in the ongoing consultative process.“At the end of the day we want laws that strike a balance between promoting citizens’ freedoms while protecting them,” Mandiwanzira said at a recent Southern Africa Media Stakeholders Conference in Harare.

For indeed, citizens’ freedoms are critical in spurring peace and socio-economic prosperity that Zimbabwe is yearning for. This is critical when viewed against the universal 2017 World Press Freedom Day theme: Critical minds for critical times: Media’s role in advancing peaceful, just and inclusive societies.

This entails speedy implementation of the long overdue media legislative reforms ahead of the 2018 elections which should be held in an open and free environment. Equally, authorities should refrain from threatening the media as that has potential to trigger extra-legal violation of media freedom by political activists and other non-state actors.

MISA Zimbabwe therefore urges the government to overhaul the media legislative framework to ensure that media freedom liberties granted in the constitution are a living reality. This should include formulating a cyber security framework that is in sync with national and regional principles that protect privacy of communication, private property and the right of all citizens to freedom of expression, media freedom and access to information.