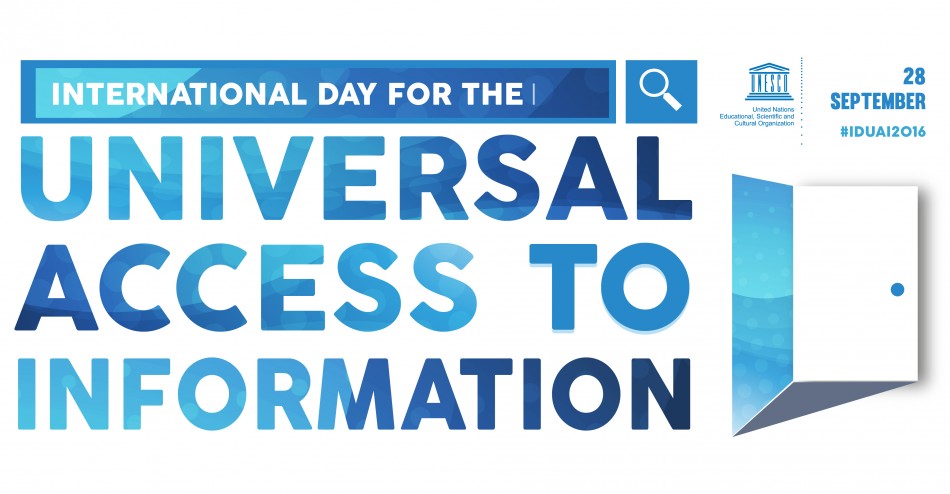 28 Sep, 2016
MISA-Zimbabwe and its media partners join the rest of the world in the inaugural commemoration of the International Day for Universal Access to Information (IDUAI) on 28 September. The day was set aside by UNESCO to commemorate and promote the right to seek and receive information as protected by key human rights instruments. These, among […]

MISA-Zimbabwe and its media partners join the rest of the world in the inaugural commemoration of the International Day for Universal Access to Information (IDUAI) on 28 September.

The day was set aside by UNESCO to commemorate and promote the right to seek and receive information as protected by key human rights instruments. These, among others, include Article 19 of the Universal Declaration of Human Rights and Article 19 of the International Covenant on Civil and Political Rights.

UNESCO adopted the International Day for Universal Access to Information on 17 November 2015 through resolution number (38 C/70). This followed lengthy lobby efforts by civil society organisations that include the African Platform on Access to Information (APAI), of which MISA is a part of.

While Zimbabwe was one of the first African countries to adopt an access to information law in the form of the Access to Information and Protection of Privacy Act (AIPPA), the law in question is a far cry from its purported import and impact.

AIPPA’s misnomer is traceable to its limited promotion of the right to information and claw back clauses on the very same right it seeks to promote, hence the incessant calls for its repeal.

This day also comes at a time when the Computer and Cybercrimes Bill is at an advanced consultative stage. Of concern in the Bill, are some of its widely couched provisions which pose a serious threat to access and dissemination of information.

This development is likely to further curtail access to information as evidenced by the increase in the arbitrary arrests, detention and assault of journalists, between June and August 2016, while covering public protests and demonstrations.

The non-licensing of community radios and the stalled digitisation programme (and its potential to increase information platforms), also pose as serious indictments on Zimbabwe’s democratic credentials.

We therefore urge the government to undertake the following critical measures, among others:

Thirty years ago on 29 April 1991, the United Nations Education Scientific and Cultural Organisation (UNESCO) convened a seminar in the Namibian capital of Windhoek which focused on promoting an independent and pluralistic African press. Participants to the seminar,...

Tensions between South Africa’s Economic Freedom Fighters (EFF) and media house, eNCA, escalated at the weekend, with the leader of the opposition party, Julius Malema, saying they would no longer be granting interviews to the broadcaster. Malema tweeted that no...